Prof. Bolaji Akinyemi, a Professor of Political Science and former Nigerian Minister of Foreign Affairs, has commented on the recent building collapse in Ikoyi, Lagos, Nigeria.

He said, “The tragedy that happened in Nigeria with the collapse of the twenty-one-storey building a few days ago definitely calls for a comment or two. What’s happened in Nigeria allows all of us to face this general moral doctrine that we all pay the price when we disobey the law. In every low-income and medium-income country, they probably have this syndrome of not obeying regulations, cutting corners, people being able to pull strings to avoid obeying rules and regulations”.

He went on to say, “There is a proverb, probably in every civilization, which says, don’t throw a stone into the marketplace because you don’t know whether it is one of your relatives who is going to be hit by the stone. When you break regulations, when you cut corners, be it, giving approval to a vehicle that is deficient in any particular area or turning a blind eye at violations of rules and regulations, whether of a plane or like in this case, a building construction or as it happened in Lebanon, allowing explosives to be stored at the dockyard. When the consequences of the breakdown of these regulations occur, you don’t know who the victims are going to be.

It is our moral duty, even if not for our own interest to ensure that we don’t cut corners.”

International election monitoring in Africa is welcome, but embassies cross the line by indicating how the electorate should vote – Prof. Bolaji Akinyemi 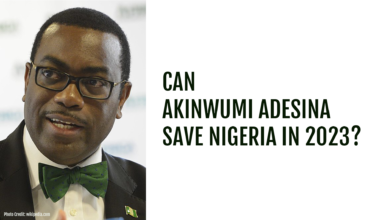 Can Akinwumi Adesina save Nigeria?