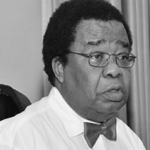 Bolaji Akinyemi is a Professor of Political Science. He obtained his doctorate degree from the prestigious Oxford University in 1969. He was an instructor in the Politics of the Developing Nations in the North Eastern University, Boston, Massachusetts; a Visiting Professor in African Studies at the DePauw University in Greencastle, Indiana; a Visiting Professor of Political Science at the Kalamazoo College in Kalamazoo, Michigan. He has taught as Lecturer and Senior Lecturer in Political Science at the University of Ibadan and by 1975, had become the Director-General of the Nigerian Institute of International Affairs- the nation’s foreign policy development and formulation centre.

In 1985, he was appointed the Hon. Minister of External Affairs, Federal Republic of Nigeria. During his period as the Foreign Affairs Minister, he was involved in negotiating the cease-fire in the Chad – Libyan, and in the Mali – Burkina Faso war. He conceived and moved the concept of the Concert of Medium of Powers — an idea which sought to bring together middle powers for the purpose of using their collective bargaining power to mediate disputes within the international system.

He also introduced the Technical Aid Corps Scheme so as to radically restructure the Nigerian foreign assistance programme. After his ministerial assignment, the Centre for International Studies, University of Cambridge, England appointed him a Fellow of International Relations. He is also a Life Member of Clare Hall, University of Cambridge, England.

He has been a member of the following reputable bodies and institutions: the International Advisory Board of the Centre for Strategic Studies, University of California, Los Angeles, U.S.A.; International Institute of Strategic Studies Committee on Regional Security Studies; Academic Advisory Board, Candido Mendes University, Brazil; United Nations Group of Experts on Disarmament and Development; United Nations Group of Experts on certain aspects of the Middle East; United Nations Institute for Disarmament Panel on South African Nuclear Capability; United Nations Organising Committee for United Nations Conference on Disarmament, Development and Security in Africa; Nigerian Government Panel on the History of Nigeria since Independence; Election Observer, Human Rights Group, Zimbabwe.

Prof. Akinyemi is a prolific writer and has authored many books and contributed his publications to many reputed and recognised local and international journals. He is very honest about his convictions and would express them without reservations irrespective of the constitution of his audience. His radical views and beliefs about political life and issues have distinguished him as one of Nigeria’s most respected Ministers of Foreign Affairs. His collaborative fight for the soul of this nation against the authoritarian regimes of the past attests to this. This is because of his belief that only democracy and freedom of expression can guarantee true development.
Ad
Follow Us
Newsletter
Back to top button
Close
Popular Posts
Close
Close
Log In